Key themes in our experiences of press and publications have been the human aspects of emergency response as well as on corporate responsibility and health and safety for newspapers such as the Guardian and the Independent and for professional and trade magazines such as Blueprint, The Safety and Health Practitioner, the Lancet, Police Review and Policing Today.

Disaster Action member Jelena Watkins has spoken in the media about the role of memorials, support groups and trauma after disaster (see http://jelenawatkins.com/in-the-media/).

A blog piece by Anne Eyre,'Psychological support in disasters is public health’s business', appeared in Better Health for All on 14 February 2014 (see http://betterhealthforall.org/2014/02/14/psychological-support-in-disasters-is-public-healths-business/).

Alana Francis, who was, at the time, studying at the Royal Academy of Arts in London, was interviewed by the Sunday Telegraph about her artwork on Lockerbie on 15 December 2013. Alana's uncle, Peter Dix, was killed in the bombing the year before she was born (see http://www.telegraph.co.uk/culture/art/10516220/Lockerbie-air-crash-anniversary-inspires-art-exhibition.html).

The Disaster Action submission (PDF) to the Leveson Inquiry into the Culture, Practice and Ethics of the Press is available to download (PDF).

Disaster Action member Edie Fassnidge wrote a letter to her mother and sister, which was published in the Guardian on the seventh anniversary of the South East Asian tsunami, which is available from the link "A letter to … Mum and Alice, seven years after the tsunami".

Requests for interviews can be sent to admin@disasteraction.org.uk. 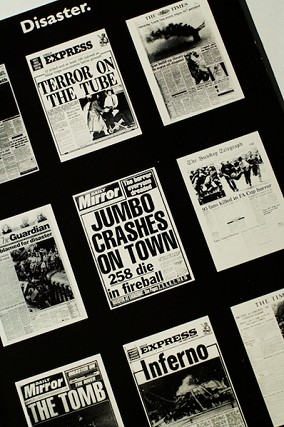